Published: Apr 12, 2022 · Modified: Aug 1, 2022 by Claire · This post may contain affiliate links. As an Amazon associate I earn from qualifying purchases · Leave a Comment

These ginger Brussels sprouts are a fun appetizer or side, and full of flavour from a zingy ginger marinade. Perfect for Thanksgiving dinner or holiday meals, these easy to make vegan smashed sprouts are a world away from the dull boiled sprouts we all used to avoid!

When it comes to a Sunday dinner or more special occasions I love to have a range of sides on the table. The more the better! Perhaps they are better than the main dish at times even . . .

These Brussels sprouts join my honey roasted vegetables, roasted zucchini and potatoes and creamy potato cauliflower mash as favourite sides. All delicious, easy to make and quite healthy too!

These smashed Brussels sprouts take the humble sprout and turn it into something a little special. Roasting the sprouts with a tangy marinade gives so much flavour, and make them feel quite decadent.

Why this recipe is so good

Healthy snack. As well as being full of green goodness, these sprouts can be served as an appetizer, side or even a snack.

Easy to make. There are a few steps to cooking and smashing your sprouts, but all are very easy to do.

Variations to the recipe

For a more caramelized Brussels sprout, add a touch of honey or maple syrup to the marinade.

Adjust the amount of garlic and ginger to taste preference. This recipe gives a kick of heat, but if you like a lot of spice then up the quantities a little.

The apple cider vinegar is optional, and my low histamine readers may wish to leave this out or swap for white distilled vinegar.

While there are a few steps to the recipe, all are easy to do. And you can always rope the kids in to smash the sprouts!

Make the marinade. Combine all the ingredients in a small bowl and stir well to infuse the garlic and ginger into the olive oil.

Prepare the sprouts. Unless you have very fresh sprouts, they often need a few steps before being cooked. You can see the difference in the sprouts that have and have not been prepared in the photo below.

Boil the sprouts. In a large pan bring lightly salted water to a boil and add the sprouts. Return to a boil and then reduce the heat to a light simmer. Cook for around ten minutes or until fork tender. Cook time will vary slightly depending upon the size of the sprouts. Drain in a colander and allow to cool until you are able to handle them.

Smash the sprouts! Transfer the Brussels sprouts to a lined baking tray and use the base of a sturdy glass or a spatula to press down and 'smash' them.

Drizzle over the ginger marinade. Use a pastry brush to coat the sprouts and get the marinade into any nooks and crannies as my mum would say! Roast the sprouts for 20 minutes or until crispy around the edges with light browning.

How do I clean and trim Brussels sprouts?

Remove any excess leaves from the sprouts, particularly if they are damaged or discoloured. Then slice the stalk off the bottom, being sure not to slice too much so the leaves still hold together. Rinse under the tap to remove any remaining dirt.

Do I have to boil the Brussels sprouts before roasting them?

To make smashed Brussels sprouts you need to boil them in water first so they are soft enough to smash and then roast in the oven.

How do you smash Brussels sprouts?

Simply use the base of a glass or a firm spatula to press down on the sprouts once they have softened from being boiled or steamed.

Can you serve Brussels sprouts as an appetizer?

Definitely! Smashed Brussels sprouts that have been roasted in olive oil and flavourings make a tasty finger food that's a bit fun and different.

A note for my low histamine readers

Brussels sprouts are one of the (annoyingly!) many foods that are somewhat debated in terms of their histamine content. The SIGHI list rates them as a '1' out of a maximum of '3' and as a liberator. Other lists state that they are low histamine. A poll on my @lowhistaminekitchen Instagram had 71% of respondents say they tolerated well. However, as with all foods, only use in the recipes here if you know you tolerate well. We are all different!

Alongside these ginger roasted Brussels sprouts you can find lots of flavourful vegetables on my sides page to enjoy with your main dishes. Some reader favourite recipes to try out: 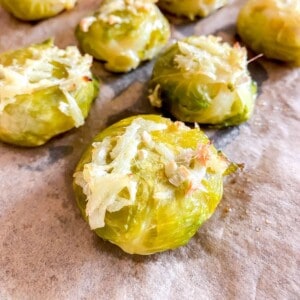 Claire
These ginger Brussels sprouts are a fun appetizer or side, with lots of flavour from a zingy marinade. Serves 4-6 as a side.
5 from 3 votes
Prevent your screen from going dark
Print Recipe Pin Recipe
Prep Time 15 mins
Cook Time 35 mins
Total Time 40 mins
Course Side Dish
Cuisine American, British
Servings 4 servings

For the ginger marinade