Published: Oct 3, 2021 · Modified: Sep 27, 2022 by Claire · This post may contain affiliate links. As an Amazon associate I earn from qualifying purchases · 2 Comments

There is nothing more fall than pumpkin spice, and this pumpkin spice chia pudding is the perfect way to start the morning! With lots of spice, pumpkin puree and all those healthy chia seeds, it will set you up for the day. A vegan, gluten free and low histamine breakfast idea.

This recipe uses the fall flavours of pumpkin spice, but using individual spices rather than a ready-done mixture. It's so tasty and a fun fall breakfast idea.

This spiced chia pudding uses individual spices that give the traditional fall 'spice' flavour but without using ready-done pumpkin spice. You will need:

If you prefer to use fresh rather than canned, my pumpkin puree recipe is super simple!

Chia pudding is so easy to make, and this one has just two steps. A very fuss-free breakfast for a busy weekend morning! Or a weekday morning if you get up early enough to make it (not sure I do . . . ).

Add the pumpkin puree, non-dairy milk, maple syrup and spices to a bowl and use a fork or whisk to combine.

Pour in the chia seeds and whisk well so they combine into the pumpkin spice liquid. Cover and set aside in the fridge for at least two hours to give the chia seeds time to absorb the liquid. Stir halfway through if possible.

Optional - just before serving, use an electric hand mixer to whisk some coconut cream to top the chia pudding.

Enjoying all the fall recipes? Why not try my pear porridge for breakfast, or perhaps my cosy cardamom milk for a fun treat. Some recent recipes: 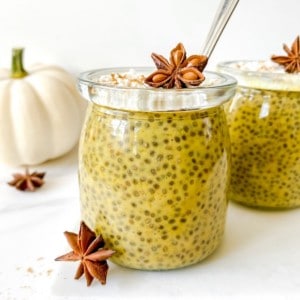 For the (optional) topping

Swiss Interest Group Histamine Intolerance (SIGHI) food compatibility list for histamine All ingredients score 0 on the SIGHI list, with the exception of: