Published: Nov 27, 2018 · Modified: Feb 20, 2022 by Claire · This post may contain affiliate links. As an Amazon associate I earn from qualifying purchases · Leave a Comment

This vegan potato corn chowder, or sweetcorn soup as my niece likes to call it, is what every chowder should be, with a hearty texture and lots of flavour. Corn is combined with potatoes, vegetables and herbs to make it a very healthy lunch or light dinner.

Chowder is one of my favourite soups to make, as it feels almost like a stew and can be served for a light dinner with big chunks of bread or crackers. This recipe joins my cauliflower and corn chowder which is a little lighter, and sweet potato corn chowder which has a sumptuous cosy feeling to it.

This vegan corn chowder recipe is a little more traditional, but I use potato to thicken, coconut milk to make it creamy and a touch of turmeric to give it a bit of spice. I hope you enjoy!

This post contains affiliate links. As an Amazon associate, I earn from qualifying purchases. This is at no extra cost to you, and is much appreciated support towards the running of the blog.

Why you'll love this recipe

This chowder recipe requires vegetables, herbs and spices, and vegetable broth. You will need:

Make sure to see the recipe card below for the full ingredients list and their quantities!

Step 1: Heat the olive oil in a large pan on a low heat, and fry the onion. Cook until softened. Add the corn, celery, potato, red bell pepper, carrot, turmeric and thyme to the pan and cook for a further five minutes, stirring often.

Step 2: Pour in the vegetable broth and apple cider vinegar, if using. Bring to a boil, and then reduce the heat. Pour in the coconut milk and stir well. Cook on a very light simmer until the potato has softened.

Step 3: Either use an immersion blender (what I use) or transfer the mixture to a food processor. Blend until creamy. If needed, add a touch more water if it is too thick. Add the salt and pepper, if using, and stir well. Ladle into your bowls and add the toppings, if using.

Enjoy these tasty and healthy soups in the colder months for lunch or a light dinner: 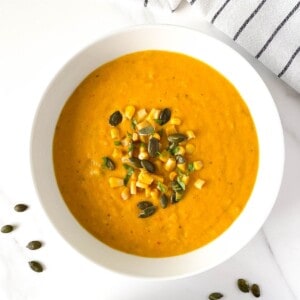 All ingredients score a '0' on the Swiss Interest Group Histamine Intolerance (SIGHI) histamine food compatibility list, with the exception of:
Tried this recipe?Let us know how it was!
Tweet
Share
Pin
Share
« Blueberry smoothie bowl without banana
Cottage cheese dill dip »