Published: Jun 18, 2019 · Modified: May 2, 2022 by Claire · This post may contain affiliate links. As an Amazon associate I earn from qualifying purchases · Leave a Comment

This panzanella (bread salad) without tomatoes combines fresh vegetables with herb soaked bread for a flavourful side salad. It makes the most of seasonal herbs and vegetables for a summer panzanella perfect for lunches, picnics or BBQs.

Come summer Italian flavours are always on the menu for my family, especially fragrant basil and creamy mozzarella. I also use these in my cherry caprese salad and stone fruit caprese salad, and both are summer favourites.

This summer salad is all about the bread soaked and toasted in a good olive oil and herbs. We leave out tomatoes so it is more suitable for those who aren't a fan, or are unable to tolerate due to dietary requirements such as being on a low histamine diet or having conditions such as eczema or urticaria (if tomatoes pose an issue for you). It's flavourful and makes a lovely side dish that comes together in around half an hour.

Why this recipe is so good

Fresh and light. Although we use oil and bread, the bell peppers, cucumber and fragrant basil make this salad feel very summery. Plus it's so pretty!

Summer produce but enjoy year-round. Perfect for BBQs, picnics and potlucks in the warmer weather!

Easy to make. All the steps are simple, with just a little time toasting the bread and frying the bell peppers.

Make sure to see the recipe card below for the full list of ingredients and their quantities!

This summer panzanella uses fresh vegetables, herbs and of course the bread soaked and toasted in herb oil. Some notes on a few of the main ingredients you will need:

Variations to the recipe

Not a fan of onion? Simply leave out or swap for some olives if these are suitable for you.

Adjust the quantities in terms of the bread and vegetables ratio to preference.

Add the onions to ice water and set aside for at least ten minutes (twenty minutes is better if you have the time). This helps reduce the strong taste of the onion (image 3).

Combine all the ingredients for the dressing and stir or whisk to combine (image 4).

Fry the bell peppers in a little olive oil in a skillet for 5-6 minutes on a medium heat. Stir to prevent burning, but a little colour is good! Remove from the skillet and set aside to cool.

Add the cubed bread to the skillet (no need to clean it first), drizzle with olive oil and sprinkle on the herbs. Toast in the pan for 5-6 minutes, stirring occasionally. To preference, add more olive oil if you like very soaked toasted bread.

Alternatively, you can add the bread to a baking tray and toss in the olive oil and bake for around ten minutes.

Combine all the ingredients in a bowl and toss to combine in the dressing.

There is a large collection of choices on my salads page, including ideas such as my mango coleslaw and roasted vegetable pasta salad. Some recent recipes to try out: 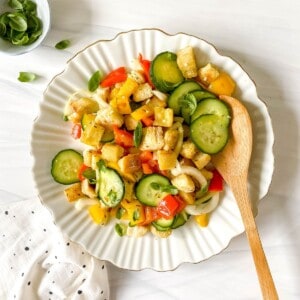 Swiss Interest Group Histamine Intolerance food list (SIGHI) All ingredients in this recipe score a '0' on the SIGHI histamine scale with the exception of:
Tried this recipe?Let us know how it was!
Tweet
Share
Pin
Share
« Low histamine vegan power bowl
Blueberry quinoa breakfast bake »