With winter well and truly here, this apple pie porridge is the perfect warming breakfast to start the day. It is full of flavour with creamy oats, apple, cinnamon and a good dash of maple syrup making it feel more like dessert than breakfast!

If your family loves oatmeal (or porridge as we call it in the UK!), then perhaps you may also like to see my carrot cake porridge, which is a fun and flavourful breakfast idea. For a bit of a change, my blackberry quinoa porridge is so tasty too!

This apple cinnamon porridge feels quite decadent from the gooey apples, maple syrup and hint of spice. It's also perfect for all the family, and whether it's for baby, kids or adults I know everyone will love it!

⭐ Why this recipe is so good

Warming and cosy. Oatmeal is always perfect for the colder months and will definitely warm you up on a chilly morning!

Fall flavours. You can of course enjoy this porridge year-round, but it's especially lovely in the fall. Perhaps even go apple picking as we do to make the recipe!

Easy to make. It's a super simple recipe, with minimal prep and just a bit of stirring.

This healthy spiced apple pie porridge only has a short list of ingredients. All are set out in the recipe card below, but some notes on a couple of them:

If cinnamon doesn't work for you (if you are on a low histamine diet, for example), then a tiny touch of cardamom instead would be nice.

As optional toppings, you can add a chopped medjool date or flaked almonds. Both work well with the warm apple.

Add the oats, grated apple, cinnamon, desiccated coconut (if using) and non-dairy milk to a saucepan (image 2). Bring to a light simmer, and then reduce the heat. Stir fairly frequently for around 6-10 minutes or until the porridge is warm and creamy (image 3). Adjust with more milk to the consistency you prefer.

While the porridge is cooking, add the coconut oil to a small pan and heat until melted. Then add the cubed apple and maple syrup and cook for around 3-4 minutes until softened (image 4).

Spoon the porridge into your bowl and top with the heated apple pieces. Drizzle on more maple syrup to taste and a sprinkle of cinnamon, if using. Serve immediately and enjoy!

Are apple porridge and apple oatmeal the same thing?

Yes! It's just a different term depending upon where you live. In the UK we say porridge, but in the US it's mostly called oatmeal.

Do I have to use non-dairy milk in my porridge?

Whether you use all milk, all water or half and half is definitely up to you! Porridge tends to be a bit creamier if you use milk.

Do you have to stir porridge?

Don't skip this bit! You don't have to stir continuously (or near-continuously) as with risotto, but stirring helps the porridge get more creamy and so more delicious!

There are lots of different breakfast options to try here on the site from my peach chia pudding to my apple and pear smoothie and so many more. Some recent recipes to try out:

For ten exclusive recipes not here on the site, check out my newly released low histamine breakfast recipes ebook! It has a sweet potato bowl and tahini chia pudding amongst many other tasty ideas. 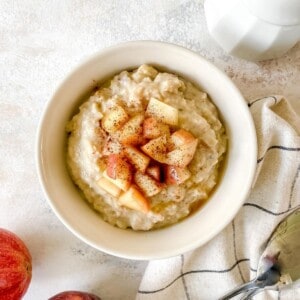 Swiss Interest Group Histamine Intolerance food compatibility list for histamine All ingredients in this recipe for apple pie oatmeal score as 0 on the SIGHI list, with the exception of: