Published: Aug 1, 2021 · Modified: Apr 20, 2022 by Claire · This post may contain affiliate links. As an Amazon associate I earn from qualifying purchases · Leave a Comment

If you are looking for a healthy and gluten-free side salad, then this quinoa tabbouleh without tomatoes is for you! A few ingredient and very healthy recipe that combines quinoa, vegetables and lots of fresh herbs with a honey garlic dressing. This tomato-free tabbouleh is vegetarian, gluten-free and a low histamine salad.

Salads are always lovely for summer picnics and BBQs, or as a healthy lunch idea. You may also like to see my kale wild rice salad and nutty wild rice salad for other delicious salad recipes!

This tabbouleh makes the most of fresh herbs, and is so flavourful. We make it without tomatoes for those who aren't able to tolerate them, or just aren't a fan, and swap out red bell pepper instead. It gives a good crunch I think!

What is quinoa tabbouleh?

Traditional tabbouleh typically combines bulgar, tomatoes, cucumber, onion and lots of mint and parsley, and is of Middle East origin. It's fresh and light, and a really easy dish that is perfect in summer for lunches, picnics or as a side for BBQs.

This quinoa tabbouleh takes the same focus on fresh herbs, and parsley in particular, but uses quinoa in place of bulgar. Quinoa has a lovely nutty taste that I think works perfectly with the parsley and mint, and soaks up the flavours of the dressing so well. It is gluten-free and also a good source of vegan protein.

As this is a low histamine recipe, I make one other major food swap in this recipe - using red bell pepper in place of tomatoes. I really like the crunch that the bell pepper gives and it works so well with the other ingredients.

This quinoa tabbouleh uses fresh vegetables and lots of herbs, as well as a simple honey garlic dressing.

If you don't follow a low histamine diet then you can of course include the traditional ingredient of tomatoes, and a touch more vinegar in the dressing too.

I haven't tried it, but a friend swears by putting a bit of very finely diced kale in her tabbouleh and it sounds good to me! Perhaps give it a little massage with some oil first to soften it up a bit.

Want even more flavour? Then add as many herbs as you like. Some people like just a light sprinkle, others want a very green salad!

Making this quinoa tabbouleh without tomatoes is really very simple and has just four steps:

Cook the quinoa according to packet instructions, and then set aside to cool. It usually takes around 15 minutes (image 1). If it looks as though it needs it, you can 'fluff up' the quinoa with a fork to separate the quinoa.

Dice the herbs (image 3). You want them fairly finely diced so they distribute amongst the quinoa.

Make the dressing by combining all the ingredients and stirring (or whisking) well to combine (image 4). Do a taste test and adjust to preference.

To let the flavours develop and for the dressing to flavour the quinoa, it is nice to leave this salad to sit for a little while before serving. Personally I think it is better at room temperature if only for a short while as I find putting it in the fridge can make the quinoa go a little hard (perhaps that is just me though!).

However, if you follow a low histamine diet this may not be the best idea due to histamine formation if you are sensitive to it. The tabbouleh can be served immediately too!

Peach and mozzarella salad with a basil dressing 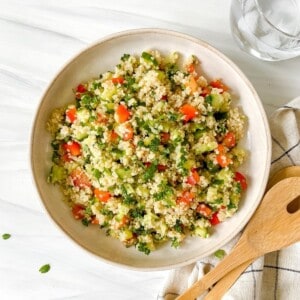 Claire
This quinoa tabbouleh without tomatoes combines quinoa and salad vegetables with a honey garlic dressing. A healthy dish that is perfect as a side for picnics and BBQs, or by itself as a lunch or light dinner. This recipe makes 2-4 servings as a side dish.
5 from 1 vote
Prevent your screen from going dark
Print Recipe Pin Recipe
Prep Time 10 mins
Cook Time 15 mins
Total Time 25 mins
Course Lunch, Party food, Salad, Side Dish
Cuisine American, British, Middle-East
Servings 2 servings