Published: Sep 26, 2020 · Modified: Jun 15, 2022 by Claire · This post may contain affiliate links. As an Amazon associate I earn from qualifying purchases · 6 Comments

Looking for an easy fish dish that doesn't include breadcrumbs for a topping? Then this honey ginger baked cod should work perfectly! It combines honey, ginger and garlic for a flavourful glaze for the fish, which is paired with a simple mixed vegetable rice.

Fish can often be a very tasty, and very easy weeknight dinner for all the family. Some other ideas that use frozen fish here on the site you may like to see are my sweet potato and ginger fish cakes and Italian herb crusted cod. Both very tasty!

For a gluten free fish recipe, my almond crusted cod is easy and delicious!

Now if you are British then you will know that when you say Chinese food the first image that comes to mind tends to be of the local take-away. Recipes full of MSG, and mostly constituting sweet and sour pork, prawn crackers and maybe dishes that have never actually been eaten in China . . .

I will confess that I thought this baked honey cod was more Thai-influenced until my good friend Sheryl of A Chronic Voice said it was actually far more Chinese in its flavours of onion, garlic, ginger and honey. As she is Chinese and obviously knows her stuff, I will grimace at my lack of knowledge of world cuisines despite being a food blogger and hide behind a cushion . . .

This baked cod requires a few ingredients for the marinade, many of which are pantry staples. You will need:

Variations on the recipe

Once the oven is at temperature place your cod fillets in an ovenproof dish. Combine the ingredients for the marinade and spoon over the fish. I know it doesn't look too tasty at this point, but it will be!

Bake in the oven until the fish is thoroughly cooked.

Cook your rice according to packet instructions.

Fry the peppers and corn with the coriander in a little olive oil until softened, with a hint of bite still to them. Combine with the rice to make an easy vegetable rice.

Fish and a low histamine diet

There are a few things to note with fish and a low histamine diet. The first is that some people may not be able to tolerate fish at all, whether fresh or frozen, and the second is that the SIGHI list recommends certain ways of eating fish and preparing it too.

Histamine forms quickly on fish, so you don’t want to eat any that has sat out for hours, maybe even days. Instead, as the SIGHI list sets out, you can eat freshly caught fish, literally fish that has come straight off the boat and onto your plate. That type of fish scores ‘0’ on their scale – the lowest score for histamine, but does have other biogenic amines and certain types of fish should be avoided. Have a look at the SIGHI list for more information.

However, most of us don’t live by the sea! Luckily frozen fish also scores as low histamine, which is far easier and I always have some frozen white fish in my freezer for a quick dinner. There are, however, some precautions to make when cooking fish. As the SIGHI list notes, even frozen fish has ‘rapid histamine formation’. For this reason, it is typically recommended that you do not thaw fish or only for a few minutes, and cook it from frozen. No leaving it laying around on the kitchen counter before you prepare the meal, just put it on a baking tray and into an already pre-heated oven.

If you have any concerns about your tolerance to fish, then speak with a dietician or doctor first. Personally, I tried a very small amount of plain white fish to begin with to check that I was ok with it, which happily I was. 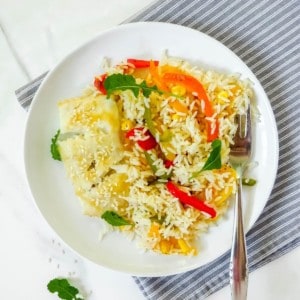 For the honey garlic marinade

For the vegetable rice

All ingredients in this recipe for honey ginger baked cod score 0 on the SIGHI list, with the exception of:
Tried this recipe?Let us know how it was!
Tweet
Share
Pin
Share
« Preparing for the October slide with chronic illness
Butternut squash, carrot and ginger soup »