Published: Mar 3, 2021 · Modified: Sep 27, 2022 by Claire · This post may contain affiliate links. As an Amazon associate I earn from qualifying purchases · Leave a Comment

This low histamine nut and seed muesli (without dried fruit) is a lovely breakfast option for topping smoothie bowls or pairing with fresh fruit and non-dairy milk. It comes together in less than 30 minutes and is vegan and gluten-free (using suitable oats).

Finding muesli or granola that is suitable for a low histamine diet can be a bit challenging when it comes to store-bought. If you would like to make your own, then my chia seed granola and ginger brazil nut granola are both easy to make and so tasty!

Muesli is a real breakfast staple, but the vast majority of brands include dried fruit such as raisins, dried apricots and dates. I wanted to come up with a version of muesli without dried fruit that was suitable for a low histamine diet but that still had a good crunch and different ingredients for flavour.

Make sure to see the recipe card below for the full ingredients and their quantities!

Just a few steps to make this granola:

Add the oats to one tray and sprinkle on the cinnamon (if using) and salt. Add the nuts and seeds to the other tray. Bake for 12 minutes, watching for any signs of burning after 10 minutes. Have the oats at the top of the oven, and the tray with nuts and seeds towards the bottom.

Once the oats and nuts and seeds have cooled, mix together to combine.

I want to say from the outset that you should always follow the advice of your doctor or dietician in relation to nuts. Some low histamine lists say that you should restrict all nuts.

The SIGHI list gives 'scores' for histamine for different nuts and seeds, and this recipe uses those that score 0 on the list other than almonds, which score 1. You can easily swap nuts and seeds in and out for those you best tolerate or prefer.

Cinnamon is a controversial ingredient in terms of histamine. Some lists such as the SIGHI food compatibility list rate cinnamon as low histamine, whereas others say it is high. It's one of many foods where there isn't an agreement.

This low histamine nut and seed muesli has cinnamon as an optional ingredient, so I would suggest only using it if you know you can tolerate it.

If you are coeliac or have a gluten sensitivity then be sure to use appropriate oats that are certified gluten-free, such as the Bob's Red Mill organic gluten free rolled oats.

And definitely use rolled oats when you make muesli rather than very fine quick-cook oats!

Muesli is great on its own with fruit and a splash of non-dairy milk, but is even better when sprinkled onto a smoothie bowl. You may like to try out my blueberry smoothie bowl for a tasty option!

For exclusive recipes not on the blog then have a look at my low histamine breakfast recipes ebook! 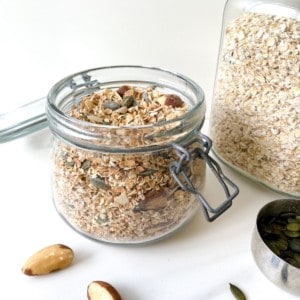 Swiss Interest Group Histamine Intolerance (SIGHI) food compatibility list for histamine All ingredients score 0 on the SIGHI list, with the exception of: