Published: Nov 4, 2021 · Modified: May 6, 2022 by Claire · This post may contain affiliate links. As an Amazon associate I earn from qualifying purchases · 2 Comments

These spiced poached pears without wine are an indulgent fall dessert, with the sweetness of the pears combining so perfectly with the hints of spice. Easy to make, they are made without alcohol and use spiced apple juice for the syrup instead, which makes them feel like such a treat. A vegan, gluten-free and low histamine dessert.

Cardamom has become one of my go-to pantry staples, and it feels rather festive. Much like my cardamom oat cookies and cardamom apple fritters, these poached pears get so much flavour from this pungent spice. Just a tiny pinch can transform both sweet and savoury dishes.

This easy pear dessert is a little twist on the classic, using spices and apple juice. It's so flavourful and fun, and I think kids and adults alike will love it! Serve with a little ice-cream if that works for you!

Why you'll love this recipe

You need minimal ingredients for this recipe, and aside from the pears most are pantry staples:

Which pears to use?

I think any pears would work well with this recipe, but I always use conference pears.

For poached pears you need to use ripe pears, but avoid using overripe ones as they can turn a bit too mushy after being poached in the apple juice.

Making these poached pears in apple juice is very simple, and requires just a few steps. Of course, be careful with the syrup as it gets very hot, so use tongs not fingers to remove the pears and the ginger from the pan when serving.

Peel the pears, but keep the stalk (if they have them) as it looks quite pretty for presentation. Don't worry if you can't fully peel at their tops and bottoms.

Add the peeled pears to a large saucepan with the apple juice, ginger, cardamom and optional cinnamon and star anise. Bring to a boil, then reduce the heat to a light simmer. Cook for 15 minutes.

Remove the pears from the pan and set aside on a plate.

Increase the heat of the apple juice mixture so that is on a low boil. Leave to boil for around 15 minutes so that it reduces into a syrup. The longer you leave the juice to boil, the thicker the syrup will be.

To serve, remove the ginger piece from the syrup (use a spoon or tongs, not fingers!) and then pour over the plated pears.

Do pears have to be ripe to poach?

The pears need to be ripe, but not overripe, so they don't go mushy while poaching in the apple juice. I made this mistake on a recipe test and they tasted great, but didn't have the best texture.

Can I make the syrup thicker?

Adjust the cooking time to preference. The syrup will reduce and get thicker the longer you let it boil. Personally I prefer it to be more 'liquid' than thick syrup, but adjust to taste.

Do I have to use all the spices?

Find lots of fun ideas on my desserts page, including my easy apple and pear compote and my quick and very delicious two ingredient mango sorbet. Some recent recipes to try out:

I’m always in the kitchen, so come join me on Instagram and Facebook to be the first to hear of new recipes. Please do leave a star rating if you tried the recipe! 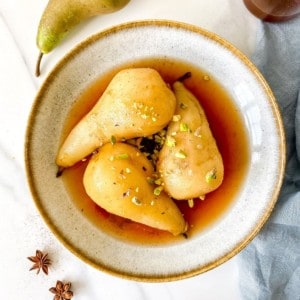